The original Doom is one of my all time favorite games. I love it, everything about it. I love the guns, I love the enemies, I love the levels, I love the art. I'm a little obsessed sometimes. Doom 1 came out 1993 in Doom 2 came out in 1994, then came Doom 3 in... 2004. See, I'm an odd position compared to most fans of the classic Doom fans; I played Doom 3 before I played the original two, on the original Xbox even. I'm not gonna lie, I was a little late to the FPS party. While games like Halo were gaining popularity I was sticking to my platformer guns (and starting to suffer because of it, lest we all forget all the bad Sonic titles that came out around this time). Eventually my friend Macoy showed me games like Halo and, you guessed it, Doom 3! I thought Doom 3 was pretty cool, but wondered what the first one was like. Remembering that SRB2 (see Fan Works #1) was built on the original Doom engine I began searching online, and discovered that the original was shareware. Oh wow! I played the hell out of it. That said, I enjoyed both of these games, but which of them is better? I've been playing both of these games, and I'm going to tell you which I feel is the more enjoyable game. Also to note, I'm going to be covering the very original versions of these games; I played Doom 1 via DOSBox emulation, and Doom 3 is the original PC release, not the BFG edition (though I did use the duct tape mod last playthrough).

In terms of game play these games could not be further apart. Doom demands you to be quick, to think fast, and most importantly kill anything that moves, by any means necessary. The weapons are numerous and range from the nearly useless starting pistol, to the enormously powerful BFG (an acronym short for Big Fucking Gun, which describes it perfectly). Doom 3 understandably borrows much from its arsenal from the original Doom games, however the style of play is a different story. Doom 3 demands you approach carefully, and is more survival horror focused. It all comes down to preference I guess: Do you want to feel like Rambo and shoot hoards of enemies, or be more slow and careful while you're engrossed in an interesting story? For me, I much prefer the first option. What can I say? I'm a simple kind of guy.

Level design wise, the original Dooms feel much less linear. In both games the levels have a definite order that you must progress through the level, but in Doom 3 you feel like you're being strung along from monster encounter to monster encounter. On the other hand, in the original Doom sometimes you'll find yourself wandering around the map looking for that one goddamn key card. It gets annoying, this never happens in Doom 3. There is no automap in Doom 3, but in Doom 1 you will need to use the automap quite often. Doom 3's level follow a linear progression, whereas Doom's levels are just sort of stand alone experiences put together in order. You can start from any map in the original game, and it won't matter much. I actually think Doom 3 wins in level design; Doom to me is more about simplicity, and the overly complex get-lost-easy levels of the original just get aggravating sometimes.

The original actually did have a story! However, the only time it comes up is in the form of post episode text screens. The remake, on the other hand, has a deeply involved story. From the get go you're introduced to characters that will come up later and effect you throughout the game, whether you just meet them or they order you around. Doom... has no characters. Doom 3 copies System Shock 2's audio log concept for backstory, and I'd say it works quite well. Doom's story pretty much defined the generic story in FPS games for years (usually involving teleporters going awry and shit invading, see: Quake, Half Life). The remade story follows the same tune, but fills in many details, and actually involves you in the story. I prefer the original on this one; I don't feel like a game like Doom needs a deeply involved story. (As a side note, the original was going to have a deeply involved story, see the Doom wiki entry for the Doom bible for more)

This is a tough thing to compare, as both games are years apart and serve different niches (action vs horror). The original game had blocky levels, sprite based enemies and objects, and was all around fake 3D. The remake has massively detailed environments and dynamic lighting. Considering the technology difference, I think I prefer the surreal environments of the original to the more gritty Aliens-esque environments of three. The original is more colorful and aesthetically pleasing to me, and helluva lot less dark. Three caters to more of a dark horror niche, so it feels more bland to me. Graphically speaking Doom 3 is much better though.

Probably won't come to surprise to you, but I prefer the original over Doom 3. It's much more of an enjoyable experience to me. I admire Doom 3's technology, atmosphere, and story, but it's hard to beat the original. Most people would probably call nostalgia bias, but I did play 3 first. 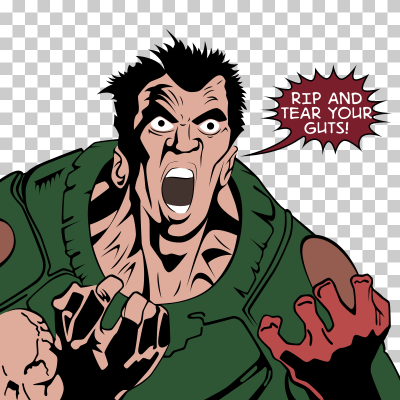 I've yet to play Doom 3 but from what I gather it's the game they wanted to make way back when. It's not the game the fans wanted them to make. They wanted another Doom1/2. Another issue is that it had already been done better, in games like SS2.

We'll have to see what approach Doom 4 takes.

You know, I've never actually played DOOM, except for a brief go at Doom 3D on the SNES. I like how you've highlighted the differences, though. I'll probably take a whack at DOOM some time, but you've actually made DOOM 3 sound better to me (Since I like that sort of game more than a generic FPS anyway)

Well, the first episode of Doom is shareware. I recommend reading this page: http://doomwiki.org/wiki/How_to_play_Doom_on_modern_Windows_systems There's probably a demo for Doom 3 as well.

Also, the SNES version of Doom is awful.

Well written Billy, you are pretty much the biggest Doom Fan I know.